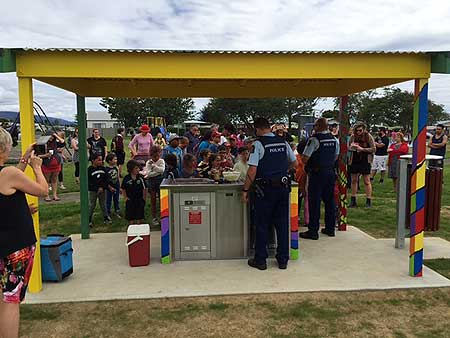 How do you turn around statistics in an area known for crime? For the last five years the Taitoko community in Horowhenua have been collaborating with others to turn the tide on crime, and it’s shown some stunning results.

Life hasn’t always been easy for the Taitoko community in Levin South. It’s a culturally diverse area not known for having much money, and increasing crime levels saw this area come under closer attention from the Police. Instead of throwing the rulebook at people, the Police wanted to work with the community to address the underlying issues of crime, and create a feeling of safety and mutual respect.

The community identified Solway Park as a potential venue for free community events, but it was lacking in basic amenities, like toilets, and needed a bit of love shown to it.

With support from Horowhenua District Council (HDC), the groups have fundraised and received help over the past five years from local businesses to get a new barbeque area installed, a basketball court and water fountain, and improved play equipment with more attractive surroundings.

They also worked with the Horowhenua Kapiti Rugby Football Union to install two rugby posts and a marked field, with the aim of organising touch rugby tournaments. They hosted the highly successful International Food Festival two years running, and Dad’s Day Out, which focused on kids spending time with their dads, creating and flying kites across the park.

Now the team are turning their attention to a 160-metre pump track at Solway Park, at a cost of over $112,000. This project has the overwhelming support of the community, and Sergeant Ian Pigott from the NPT says it’s a project that the community deserve to have.

“Over the past five years, the community have proven they are worthy of the efforts put in by themselves and the NSP. The Pump Track will give everyone in the community the chance to get outside and be active. They’re designed for all things on wheels – scooters, skateboards, BMX and mountain bikes – and they provide challenges to all age groups,” he says.

The team approached Eastern & Central Community Trust for funding, and were delighted to be granted $70,000 towards the project.

Andrew Collis from NSP says the local community have already stepped up, with the Taitoko School Junior Neighbourhood Support Group keeping a watchful eye out for graffiti, and taking responsibility for their neighbourhood. When the groups built a fence around the play area, hundreds of adults and children turned up to help paint and decorate the posts.

“We are looking to start the project in October when the weather is a little better suited to earth works,” says Ian. “We can’t wait to see it in action.”